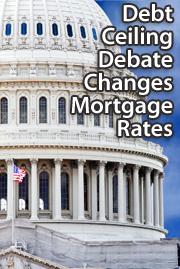 The United States is projected to reach its legal $14.294 trillion debt limit today. The limit was set by Congress February 12, 2010. The U.S. Treasury may not issue new debt beyond the debt ceiling.

Since April 2011, Congress has debated ways to remain below the nation’s $14.292 trillion borrowing limit. The debate commenced with the passage of the 2011 U.S. Federal Budget which featured a $1.645 trillion deficit.

This multi-trillion dollar deficit ensured that the debt ceiling would be touched at some point during the current fiscal year.

That date was May 16. It took an intervention from the Treasury Secretary to temporarily extend the limits; an “extraordinary measure” meant to keep the U.S. government from defaulting on its debt.

With additional room to borrow, then, the U.S. Treasury’s new debt ceiling date was moved to August 2. Congress has been debating the federal budget since mid-May with the dual-goal of (1) Remaining below the federal debt limit, and (2) Creating a budgetary surplus for the future.

An agreement is expected today.

For home buyers and rate shoppers , this is an important development. The debt ceiling agreement will influence mortgage markets and, as a result, require amendments to home affordability calculations. As mortgage rates change, your purchasing power does, too.

Unfortunately, we don’t know in which direction mortgage rates will go.

Since the prospect of a deal was first hinted Friday, mortgage rates have been improving. Conforming, 30-year fixed rates are down nearly 0.250 percent, lowering a $150,000 mortgage payment by $22 per month.

The final terms of a deal, however, could lead rates higher.

As always, the safest play is to lock your mortgage rate if you are comfortable with its proposed payment. Yes, mortgage rates may move lower in the future but, then again, maybe they’ll move higher.