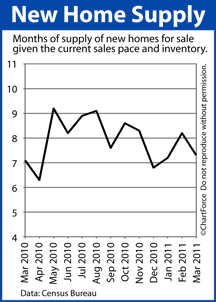 Based on joint research from the Census Bureau and HUD, 300,000 new, single-family homes were sold on a seasonally-adjusted, annualized basis in March. It’s an 11 percent improvement from February, and right in-line with the 6-month average.

The supply of available new homes improved, too, in March, falling by close to a full month.

At the current pace of sales, the entire new home housing stock would be sold in 7.3 months. This is the second-best reading in a year, a statistic partially-supported by the relatively small number of new homes on the market.

There are now just 183,000 new homes available for sale. That’s the smallest reading since the Census Bureau started to keep New Home Sales records beginning in 1995.

However, it should be noted that the March New Home Sales data is suspect. The reading’s margin of error exceeds it actual measurement by almost double. It’s possible that sales volume fell in March instead of rising, therefore. The Census Bureau says as much in its footnotes:

The change [in new home sales] is not statistically significant; that is, it is uncertain whether there was an increase or decrease [in March 2011].

We won’t know for certain until future data revisions are made.

If you’re a home buyer , though, and want to stay ahead of the market, you won’t want to take chances. If the Census Bureau finds its data to be accurate after revisions are made, new home prices will already have started to rise.

You may get your best home value by buying sooner rather than later.